On the day that BC Drop Shot celebrated its 75th anniversary, it also had to compete in 'a sort of derby'against VELO, with title candidate Almere visiting the next day.

During the preceding reception, chairman Robert Hoogland of BNL chairman Jan Helmond received the medal of Badminton Netherlands. Then the game against VELO was on the party program.

In an excellent atmosphere, Ciar Pringle and Lars Kros had to give the point to VELO players Russell Muns and Nick Fransman. On the other field, Jaymie Laurens and Rosy Oktavia battled Myke Halkema and Kelly van Buiten. The score was tied again with 21-9 and 21-17.

Dicky Palyama faced Dion Rovers and the 44-year-old nestor showed once again that there is still little wear and tear on his arsenal. Dicky left Dion little hope of a stunt. On the other court Rosy also left Veda Diemel little chance, with energetic play this match was also decided in The Hague's favour. Jaymie played a strong game against Anna Mikhalkova and again took the point for Drop Shot.

The best match of the evening was surely the battle between Martin Bundgaard and Nick Fransman. Nick took the first game 16-21, but Martin hit back hard with a 21-5 win. The third game was a real battle of wear and tear, with Martin winning 21-14 at the end.

On court 1, Lars found substitute Kaylee van der Wiel next to him as a mix partner. With Lars as an excellent coach in the field and encouraged by the many club mates, Kaylee was able to play freely and that resulted in an (unexpected) easy win over Alexander Strehse and Milou Lugters.

On court 2, Ciar and Novi Wieland did their very best, but the experienced VELO duo Russell and Myke was just a size too big. After all matches, the scoreboard was 6-2. An excellent result for BC Drop Shot with a view to qualifying for the championship pool.

Sunday, October 2 Almere
On October 2, BV Almere came to visit, one of the championship candidates, who played 4-4 the day before against DKC, both in the best formations. Almere also came into the line-up with international top players Adam Hall, Cheryl Seinen and Siril Verma. From Drop Shot, “gathering the dots” was the motto of the afternoon.

The men's doubles was expected to be lost. Ciar Pringle and Martin Bundgaard had to bow their heads to Adam Hall and Alex Vlaar. In the women's doubles the surprising win of Rosy Oktavia and Jaymie Laurens against Cheryl Seinen and Kirsten de Wit. In three close games (23-25, 21-19 and 22-20) it was 1-1.

Lars Kros had a very difficult time against Dennis Koppen and went down without a chance. Novi Wieland again equalized by beating Diede Odijk. Martin Bundgaard played a good first game, but came up just short (18-21), after which Siril Verma gave some more gas and went on to win 11-21.

But there was Rosy again and she didn't give Lauren Middleton a chance. After the doubles and singles, the score was 3-3.

Lars with Novi put up a very good resistance to Alex and Eleanor O'Donnell, but just came up short for a nice stunt. On the other court, Ciar and Jaymie gave their best against Adam and Kirsten, but unfortunately they just failed to force a third game.

Almere returned home with a 3-5 victory, and BC Drop Shot was allowed to step off the court with his head held high. Because in view of Almere's match against DKC on Saturday, few had hope of such a narrow defeat beforehand.

Now that BC Drop Shot has had all the clubs from the traditional left-hand row, the team can build on last weekend's good games to overtake the biggest competitors for a place in the top 5, VELO and Amersfoort.

All credits for the photos to our "court photographer" René Lagerwaard. 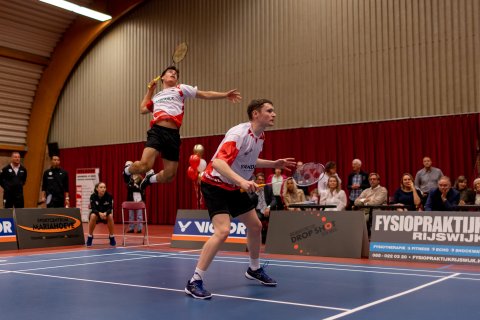 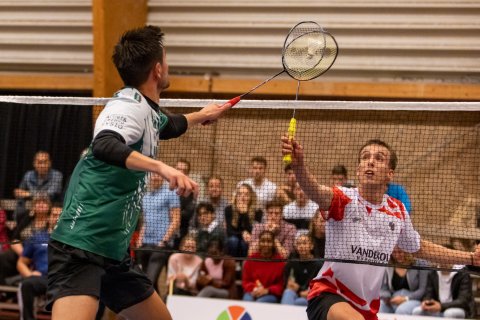 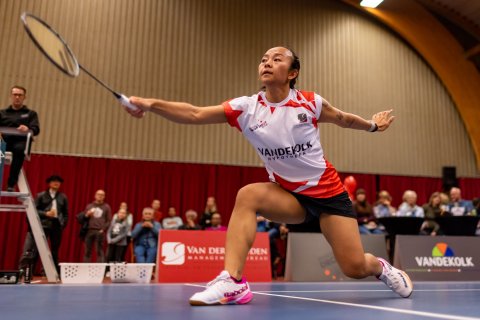