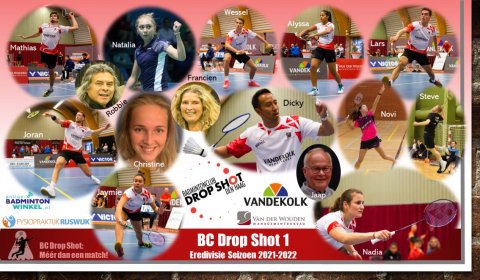 BC Drop Shot is ready to rumble

After almost a year mandatory rest, the new badminton competition for the Eredivisie teams will start on September 11

Last season BC Drop Shot already indicated that it was certainly one of the contenders for the national championship, but standing in first place, the second Corona wave threw a spanner in the works and the competition had to be aborted.

In its third premier league season, BC Drop Shot's ambitions will also be no different than last season: a place in the top three, which gives at least the right to participate in the play-offs.

Compared to last season, there are some changes to report in terms of player level. Nadia Choukri wanted to continue her career in France, so she was no longer allowed to play for Drop Shot. Unfortunately, Nadia suffered a nasty ankle injury during a tournament in Spain (we wish Nadia a speedy recovery). Imke van der Aar has also left the club and will try to fulfill her badminton dreams in Denmark. But we will certainly meet Imke again along the track in The Hague. Her brother Wessel had a hip operation a while ago and is now busy with his rehabilitation. Things are going well and it seems that Wessel can also be used this season. When depends on the progress of his recovery.

Where players leave, stay and come. For the 2021-2022 season, we managed to keep leader Joran Kweekel with some determination. Besides Joran we also see good-old Dicky Palyama back on the track, he can't get enough of that shuttle. And he showed last season that he still belongs to the top of badminton in the Netherlands, even though a 4 has been in front of his age for four years. (Funny is that Wikipedia mentions that Dicky is a former badminton player, but visitors to the BC Drop Shot matches know better)

We also see Lars Kros in the team for the third season in a row. We can also call our Danish stylistic doubles and mix specialist Mathias Thyrri Jörgensen Dropshotter for the third season. He will be joined by his compatriot Steve F Olesen, who will in principle take the place of Wessel as long as he is not available.

Jaymie Laurens will be the frontrunner for the ladies and will show that she has made great progress, despite the Corona lee. Alyssa Tirtosentono will again see Christine Busch Andreasen next to her in doubles. The youthful couple can provide a surprise against the stronger doubles. The Swiss Nadia Fankhauser who came over from Roosterse BC last year will also play for Drop Shot this season and she sees talent Novi Wieland coming over from Roosterse. Another acquisition at the last minute, where the ambitions of BC Drop Shot prompted Natalia Perminova to switch from BC Amersfoort.

All in all, there is still a strong selection on paper, but as has been the case every season, this season the composition of the team will depend on the agenda of the international tournaments. But that also applies to those opponents who also have players in TeamNL and/or participate in the tournament circuit in pursuit of ranking points to have a greater chance of participating in European Championships, World Cups or the Olympic Games in 2024.

We are happy that we have kept Robbie Kneefel and Francien van der Aar for the club during the team coaching. Not even PSG dollars have tempted them to leave BC Drop Shot.

As a club we are very happy with our sponsors, because as a club with ambitions you cannot do without them. Main sponsor Jaap van de Kolk (Van de Kolk Mortgages), Henric van der Wouden (Managementbureau van der Wouden), Robert Hoogland (Physio Practice Rijswijk) and Dave Macaré (Macaré Sport/Online Badmintonwinkel.nl) will again be in the competition often next season. find sponsor corner.