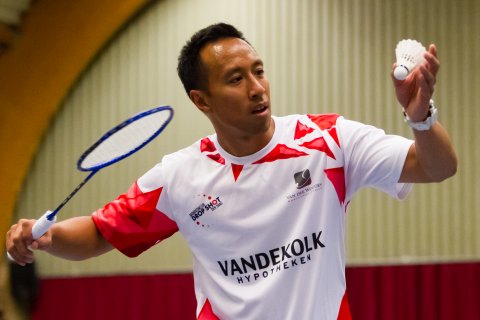 BC Drop Shot retains the lead

On Saturday September 18, the Drop Shot caravan headed for Limburg for the far away game against Roosterse BC. Roosterse had won a big win against AMOR and can build on a solid team

Drop Shot had to do it in the men's doubles without the regular couple Mathias and Wessel, which is why occasional duo Dicky Palyama and Lars Kros had to compete against the Roosterse duo Rick Steuten and Noah Jongen for several years now. It turned into an exciting battle where during the rally on 20-19 the string of Dicky's racket broke, causing the rally and the first game to be lost. The second game was also exciting and eventually went to Roosterse again with 21-19. A bad start for Drop Shot and 1-0 for Roosterse.

Christine Busch back in the party

In the women's doubles the Danish Christine Busch was again present and played a good match with Alyssa Tirtosentono against Dorien Lups and Kirsten Boonen. The Drop Shot duo took the point 13-21 and 8-21.

At the men's single Joran Kweekel faced Rick Steuten and in the first game Rick still struggled, but in the second game Joran made the class difference 9-21 clear. In the women's single, Jaymie Laurens took on Dorien Lups, an always difficult opponent. That proved to be the case again in this game, where the first game was won by Jaymie 18-21. The second game, Jaymie was always behind, but she kept fighting to eventually win that game 21-23. Standings after the first singles: 1-3 for Drop Shot.

Lars Kros had a strong opponent in Marijn Put, Belgian champion, but was evenly matched in the first game (24-22 for Marijn), but in the second game the difference turned out to be just a bit too big and Marijn took the lead with 21-12. second point for Roosterse on the scoreboard. The second women's single was between Novi Wieland (ex-Roasterse) and Flora Wang (who made her first badminton steps with the youth of Drop Shot) and Flora showed in the first game that she is in the national youth selection for a reason. She made it very difficult for Novi, but Novi came out on top with 22-24. Novi now had the rhythm and gave Flora no chance for a stunt in the second game. With 10-21 it became 2-4.

In both mixes, the Drop Shot duos proved too strong for Roosterse's. Joran and Christine gave Marijn and Flora little hope for a point (2x 11-21) and Dicky with Alyssa were not inferior to that. With 14-21 and 14-21 against Noah and Kirsten, the final score of this match was set at 2-6 for BC Drop Shot. With the result of Duinwijck (7-1 against VELO), Drop Shot is still at the top because of a slightly better point balance than Duinwijck.

The next home game is scheduled for September 25th. Groningen AMOR will be the opponent after a long journey.