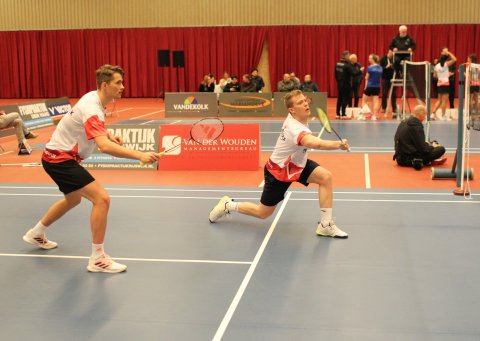 BC Drop Shot leads again due to big win

On Saturday, November 6, BC Amersfoort was the opponent of BC Drop Shot. Including this match, there are still 2 duels to go until the end of the first phase and the higher the position in the ranking, the more points are taken towards the second phase.

BC Drop Shot had the same players as last week against Hoornse BV, now supplemented by the Dane Steve F. Olesen. In the men's doubles, Wessel van der Aar en Steve Olesen took on Niels Veenstra and Ruben Wijnands. The first game went to Drop Shot 21-12, but the second game the resistance was considerably greater. Only on 29-27 did Wessel and Steve decide the game.

In the women's doubles it went fairly evenly, but Alyssa Tirtosentono and Jaymie Laurens always managed to create a gap against Madouc Linders and Meike Versteeg and managed to put the 2-0 on the scoreboard with 21-19 and 21-16.

Joran Kweekel  managed to beat Hans van Os in a very one-sided men's single 21-7 and 21-4. In the other men's single, Lars Kros found a dogged Niels Veenstra facing him. The rally of the day was in the second game of this game with a nice trick shot from both gentlemen. Niels was just a little firmer in his strokes in this single and won 16-21 and 16-21.

In the first women's single, Jaymie Laurens and Meike Versteeg were evenly matched. Jaymie was just a bit more determined in the first game (21-18) and managed to take a few points lead in the second game and built it up to a 21-14 win. Novi Wieland  took on the left-handed Anouk van Wijk. The first game was easy prey for Anouk 8-21. In the second game, almost as usual, Novi threw off the tension and fought back into the game. With 21-17, Novi forced a third game, and there she showed again that she has a strong mentality. With 21-14, the point went to Novi.

With a score of 5-1, there were still 2 bonus points waiting for both teams, because for Amersfoort DKC might still be within reach for that fifth place. The first mix of Joran and Alyssa against Hans and Anouk was won relatively easily by the Drop Shot duo, who sometimes struggled to maintain their concentration (21-14 and 21-13). Steve and Novi took on Ruben and Madouc and the first game went to Amersfoort 17-21. The second game, Steve and Novi got better at their game and made the decision via 21-15 for a third game. It turned out to be a very exciting game with Steve and Novi eventually taking the lead with 24-22.

With the 7-1 final score, it was a matter of waiting to see what the competitors Duinwijck and Almere did against each other, but due to their draw, Drop Shot was level with Duinwijck, but due to a better game balance, BC Drop Shot is in first place, with Almere there. one point behind.

Next week is the last match of phase 1 and the final score of this phase determines the number of bonus points that will be carried over to phase 2. BC Drop Shot plays the away game at VELO (4th), while Duinwijck visits Hoornse BC and Almere receives number 5 DCC.

Photo: Steve Olesen with Wessel van der Aar concentrated on his way to victory in the men's doubles.