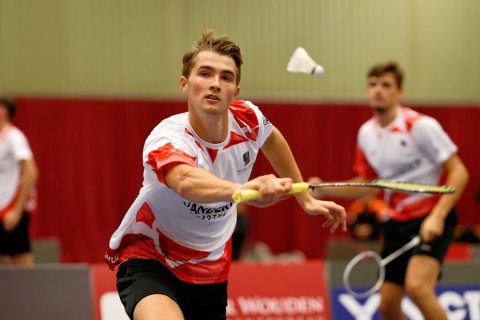 After almost a year without league games, all Eredivisie teams were eager to start the new competition. The slightly modified Drop Shot took on Smashing from Wychen on September 11. Fortunately, there was also an audience along the field, which adds a bit more atmosphere to such a match.

Also in the last 2 competitions this was the first game and each time Drop Shot took home a 7-1 victory. Smashing appeared in the best line-up on paper, while Drop Shot leader Joran Kweekel from The Hague, Danish acquisition Steve Olesen and the ladies Christine Busch, Nadia Fankhauser and Natalia Perminova were missing. The players who are present should have sufficient quality to be able to achieve a good result.

In the men's doubles, Wessel van der Aar, who had recovered from a hip operation, showed that he is back on track with Mathias Thyrri. With 21-12 and 21-7 Brandom Bessem and Yannic Smeets had no chance. Occasional duo Alyssa Tirtosentono and Jaymie Laurens faced Lieke Maes and Denise Hall on the second field. The first game went fairly smoothly, the second the cooperation was clearly better and the score was 2-0 with 21-17 and 21-13.

Good-Old Dicky Palyama took the honors of Joran in the first men's single. Still a pleasure to watch how opponent Teun Gootzen was regularly put on the wrong foot by means of a feint. With 21-14 and 21-9, the point went to Drop Shot. Jaymie Laurens had a hard time in her single against the strong Denise Hall, but managed to find an acceleration at the right moments and win 21-18 and 21-15. Intermediate score 4-0.

Second lord Lars Kros showed that he has grown in his game again, had a hard time against Yannic Smeets in the first game, but in the second game he threw away all hesitation and left the point ahead via 21-18 and 21-9 Add Drop Shot. On the other field, the talented Novi Wieland, who had come over from Roosterse, competed with Maureen Zewald. Perhaps overcome by nerves, Novi had to leave the first game to Maureen 17-21. The second game went even better and Novi showed that he has a lot of talent, 21-12. In the third game it went evenly, until on 13-12 Maureen stumbled and unfortunately had to stop the fight injured. With the mix-doubles ahead, the score is 6-0.

In the first mix, Novi and the stable Mathias faced Brandon Bessem and Ella Peters. The first game was easy prey for the Drop Shot mix with 21-8. In the second game it got a bit more exciting due to, let's keep it up, loss of concentration. Still, that game was won 21-17 by Drop Shot. On the other field also an occasional duo on the Drop Shot side with Dicky and Alyssa against Teun Gootzen and Lieke Maes. Dicky showed that he can also mix a nice game and it was a relatively easy victory via 21-13 and 21-5.

With that last result, BC Drop Shot has shown that it is ready again and let's hope that we can finish this season without Corona vicissitudes. Take Care, Stay Safe

On September 18 BC Drop Shot will play the far away match against Roosterse BC, and on September 25 the Groningen AMOR will visit Sports Center Mariahoeve, starting at 6 pm.